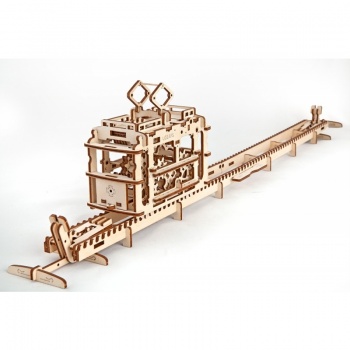 The product is no longer available. Product is displayed only for informational purposes.

The tram is one of the oldest types of urban passenger public transport. An electric tram appeared at the end of the 19th century. To this day, the very first such cable tram has survived, patented by Abner Doubleday and built in San Francisco. Passenger transportation on the line began on September 1, 1873. Later, electric trams appeared, such as the famous Budapest tram BKVT 1074, which appeared on the streets in 1912.

Start a series of urban transport  with an old tram!

UGEARS tram is the most romantic model. He can transport the message to the other side of the table.

It is started by a special wheel on the roof. It has a built-in note box. This model can work not only on a rubber motor but also as a funicular. At both ends of the track, there are special levers with which you can lift the road and lower the car along it to each other.

If the levers lift and fix the road turns into a bridge.

The "current collector" of the tram serves as a lever that extends the wheel of the plant up. On the roof there is also a lever for switching the direction of the plant, a lever for starting the tram and a lock for the position of the "current collector" and the cover of the box. At the bottom, on both sides of the tram are retractable hook-couplers. It even has an opening emergency exit to the roof.