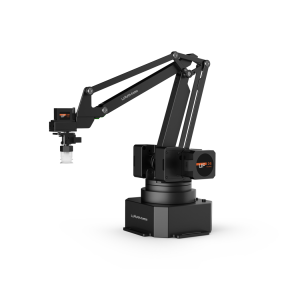 The product is no longer available. Product is displayed only for informational purposes.

The uArm Swift Pro is a high grade desktop robotic assistant that can be utilized in many more applications than its predecessors. Built around an Arduino Mega 2560, the uArm Swift Pro is an open-source and DIY friendly robotic arm platform developed for makers and educational purposes. This little bot is extremely easy to use, almost anyone can learn how to play with it in a few minutes. The uArm supports visual programming as well as Arduino, Python, GRABCAD and ROS programming providing plenty of options for any range of user. Unleash the maker inside and get uArm to make your idea happen!

The uArm Swift Pro has a repeatability of 0.2mm with a maximum payload of 500g making it one of the most high tuned consumer grade robotic platforms on the market. Thanks to its high quality stepper motors, four degrees of freedom, and its advanced controlling algorithm, the uArm Swift Pro performs not only with accuracy but also with smoothness and stability. Thanks to these attributes, the uArm Swift Pro can even be used in laser engraving and 3D printing situations with appropriate end-effectors.

Each uArm has several ways of operation and control. The easiest way to start is with Offline learning mode which requires no coding experience or complicated assembling at all. You simply need to power it on, press record, teach the arm what to do by dragging it and that's all! uFactory has also developed two intuitive apps to control the uArm. uArmStudio, comes in a clean and intuitive user interface with instructions, setting and diagnosis built in for Windows, Mac OS, and Linux while uArm Play is available for smart phones.