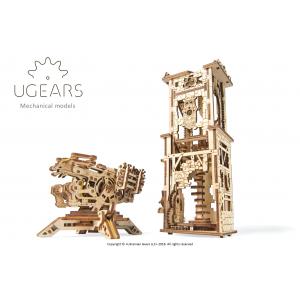 Ugears invites you to plunge into the romance of the Middle Ages and try yourself as a master of siege art with  new fascinating model "Tower and Ballista." Inspired by the best examples of ancient artillery pieces, legendary battles, revived in films, books, games, this model - a variation of a classic combat vehicle gives you a chance to feel like a great conqueror and hero of past times.

The model consists of two parts: the siege machine itself and the mechanical tower. Both parts have multiple movable mechanical units and parts.

The Arkballista also consists of two parts: a firing module and a base. The base provides a mechanism with sliding legs for stability of the structure during firing. The firing module - in fact, the arcballist herself - shoots wooden shells. The mechanism allows you to install four charges at the same time and fire several shots in a row.

The model implements a mechanism for horizontal and vertical aiming, regulating the rotation and inclination of the body. On the right side of the model housing there is a lever that starts the mechanism. The same lever is a trigger mechanism.

The firing module is removed from the base and can be installed on the upper platform of the Tower - the second part of the model.

The siege gun, created to destroy fortified defenses, has been known since antiquity. However, the design of the Ugears model, especially the decorative elements of the Tower, dates back to the Middle Ages. The traditional ivy-covered castle tower, decorated with an original ornament and coat of arms with a heraldic griffin/dragon, hides several mechanical secrets: in the end, this is the Ugears model, which cannot be a simple static designer.

On one side of the Tower there is a wheel with levers for lifting the second level, opening the first floor spiral staircase, passing into the structure of the second floor, as well as the internal frame of the building. The upper position is considered fixed when the shield with the image of a dragon/griffin is fully visible, installed in a position parallel to the tower wall. The shield is your goal. Hit it with a wooden Arkballista shell, and the second level of the Tower will fall, swept away by the blow of your siege gun.

The designers of the model gave the tower a partially destroyed appearance so that through the holes in the walls you can observe the elements of the frame and the work of a skilled mechanism that drives the model.

Time to anchor and on all pairs go to meet new discoveries with an exciting marine model from Ugears..

Spherocube is a mechanical model of an antistress puzzle. It is a kind of stimpank-skeleton cube, co..

Travel is an integral part of modern life. On trips, we find new impressions, learn and develop. And..

o Assemble it and discover the principle of working of the Three-digit Clicker-Counter.o Experiment:..

Feel the free wind of the frontier in your hair, go with your whole family on a fascinating trip to ..

If the childhood dream of flying in heaven is still alive, but difficulties arise with entering the ..

We all know that real values ​ ​ do not have a monetary equivalent. However, if you still need the o..

One of the most beautiful models of tm UGEARS timer for 20 minutes. This is a mechanical chronometer..

We all know the question when planning cases: on what day of the week one or another date falls. We ..