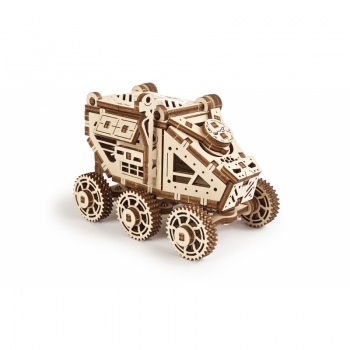 Humanity will never stop dreaming of stars. New rockets and new teams are already being prepared, plans are being created to develop the moon and Mars - well, UGEARS cannot lag behind the space race. We take  step forward and present to your attention "Marsobaggi": the most romantic planetary trip in the world!

You have a six-wheeled, fully mechanical astronaut. The futuristic contours of Marsobaggi are harmoniously combined with the Stimpankov mechanics characteristic of UGEARS - perhaps in some of the parallel worlds the first conquerors of the red planet looked exactly like this.

And the coolest thing: Marsobaggi does not just drive, it is quite suitable for transporting small goods. Erasers, staples, sharpeners: there is no more original way to convey to a colleague the thing he needs than using a rover from UGEARS.

The model is assembled without glue and other fasteners, and works almost forever, as should a self-respecting space wanderer. NASA plans to land on Mars no earlier than in 2050. Elon Musk puts on the 2025th. You can prepare for the exploration of near space now, along with the Marsobaggi from UGEARS!