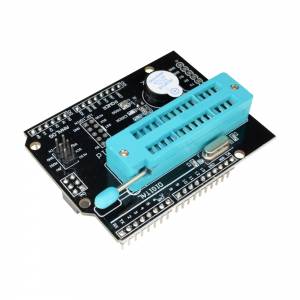 This is a programmer expansion shield that allows your Arduino board to modify the fuse bits and burn bootloader into external chip and other Arduino boards.
On-board buzzer and LED indicators, indicating whether the burning is successful, it is convenient for Arduino board designers to batch burning. According to OPEN-SMART user manual, it is very easy to use.

- Compatibility: As it uses SPI pins of ICSP interface, compatible with Arduino UNO R3 / Arduino Mega2560, can change to the bootloader burner when it is directly plugged onto the two boards.
- Operating voltage: 5V
- Operating current: 500mA (max)
- Arduino board to be burned: support Arduino UNO R3 / Mega2560 / Nano / pro mini (5V 16M)
- On-board buzzer, if the fuse bit is successfully modified, it will sound once, and then if burning bootloader is OK, it will sound once again. If it is not two beeps, burning is failed. You can capture the sound instead of LED lights, so this will improve the efficiency of burning.
- On-board LED indicators, HEART BEAT led lights up like a breathing light when powered normally. During programming, the PROG indicator flashes until it finishes. If the programming is unsuccessful, the ERROR indicator (red) will light.
- Onboard 28P locking seat for Atmega328P, Atmega168P, Atmega8 bootloader burning
- Onboard ISP_6PIN interface, for the external Arduino board bootloader burning
- On-board ISP_10PIN interface
- On-board FT232RL and CH340G USB to TTL programmer interface for uploading code to the chip on the 28P locking seat.